I have not been a loud proponent of DC's latest marketing stunt, but as issue after issue flies off the shelves at my local comic retailer, I feel I would be remiss if I didn't start sharing some of my thoughts on The New 52. I thought I'd start with the book that should NEVER have been relaunched. If any title should have been too sacred, it is this one. 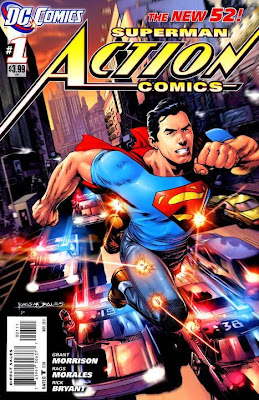 This September they launched Action Comics Vol. 2, handing the responsibility for guiding this flagship title to Grant Morrison, an author that should have inspired great confidence after his sensational work on All-Star Superman. Strangely it was Grant's proposed direction for Action Comics that really sparked my distrust for what DC has planned.

I stand by my previous position regarding the relaunch; I don't like it.

That said, this issue gets a solid 'A' grade. Morrison may be representing a character that doesn't resemble the Superman I know and love, and he may look completely asinine running around in jeans (although running around in tights is a little......ummmm.....questionable as well) but the story that he wove together to launch this series is unquestionably fantastic.

I can describe it best in two words: it's fun.

I especially enjoyed the way we get our first glimpses of both Luthor's genius, and his insanity. There's still too much "Batman" in this comic for it to feel right to me, but if I could just forget that I'm supposed to be reading about Clark Kent, and simply read the series, I'm sure I would rank it amongst my favorites. No doubt Morrison, who benefits from terrific work by Morales, will continue to weave a captivating re-imagining of Superman's early days in Metropolis and will eventually win some kind of award for it.

I won't even be surprised if an entirely new generation of readers sees this as their 'ideal' Superman going forward. It just won't be mine.
Posted by The 4th Man at 1:04 PM